As an engineer, when you have a piece of processing work to be done, you’re always concerned with how best to achieve that work efficiently. i.e how can the work be done in as little time as possible, with the right amount of resources?

For most simple workloads, you likely don’t have to think about writing the most optimal process. You can get away with a simple for loop that iterates over all the items that need processing and you’re done. Simple and sweet.

When workloads start to get larger, things get more interesting. You start to realize that the for loop has begun to take longer to finish. You now need to explore ways to split that workload among different processes. With each process doing a bit of the work concurrently, your total processing time (TPT) reduces and you’re happy.

This concept is one of the various ways you can apply co-ordinated batch processing to handle complex workloads. In this post, we’ll be exploring a simple pattern for concurrent work processing, the join pattern, whilst writing logic in Python and providing work queues with RabbitMQ.

Python is one of my favourite programming languages, because of it’s principles. We’ll be writing the application logic in Python 3. You can install Python 3 using the official download page.

RMQ is a message broker system that we’ll be using to provide our sample work queues. If you don’t want to install Rabbit MQ on your system, you can go the Docker route like I did.

The sample work we are going to be doing, is counting how many times the word “more” occurs in a group of sample texts from Shakespeare. To make the amount of work we are doing more complex, I doubled all the text about four times into one large text file of about 45MB.

Since we are going to be re-using this logic amongst different queues, a good first step is to create a function that houses this logic, so it’s re-usable. This code lives in main.py so we can import it from each worker.

Let’s look at the common patterns we use to interact with RabbitMQ, so we can understand them in the code. Connecting to RabbitMQ

Since we’re going to be connecting to RabbitMQ in the same way, it makes sense to highlight that logic here so we don’t need to declare it in all the code samples.

Sending Data to a Queue

To send data into a queue, we call the basic_publish method. We package the payload (which is JSON-encoded) and then specify the queue using the routing_key argument, with routing through the default RMQ exchange.

Consuming Data from a Queue

To listen for work on a queue, we call the basic_consume method. The arguments include the queue name and a callback function to perform the work.

Now that we have an overview of how we’re working with RMQ, we can now discuss all the approaches we are taking. 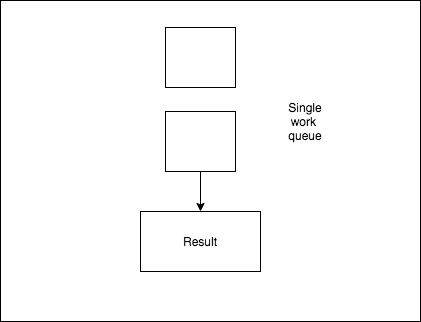 In this approach, we will send all the work items into a single queue and have one worker process all the items as once. It’s the bare minimum approach, so we can get time estimates and see if applying co-ordinated batch processing saves us time, or not 🤷🏽‍♀️.

To implement this, let’s split our logic into two files:

The Join Pattern is a simple batch processing pattern, in which work is split into different queues and sent to a single queue to process the results. Hence the work is “joined” from multiple queues. In our example, we shall be sharding our work into multiple queues, processing them in those queues and computing the results in a “join” queue.

To make things even more interesting, let’s explore the differences between using two queues and three queues. My assumption is that with three queues we’d be able to reduce our TPT even further, but you never know. We also have to consider the communication overhead that comes with transferring our data between multiple queues. 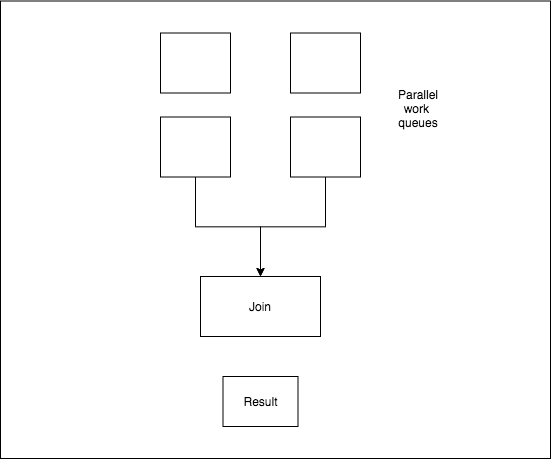 To implement the pattern we need three files: 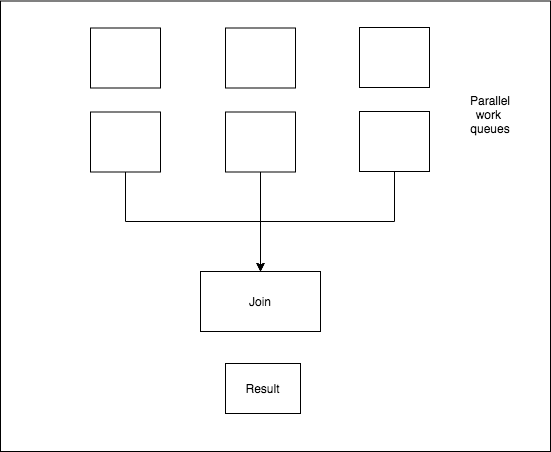 Since the main difference in the code is adding process_words_3 to all the code blocks concerning queues, and increasing the size of the sharded array to 3, I won’t be repeating all the logic. What we’ve done though, is split the work amongst three queues, so we expect a shorter processing time.

Side Note on Concurrency vs. Parallelism

When I first wrote this post I believed this was parallel processing, but it’s not. Instead it is concurrent programming.

Based on their definitions, Concurrency means multiple tasks which start, run, and complete in overlapping time periods, whilst Parallelism means when multiple tasks run at the same time e.g. on a multi-core processor.

The faster processing in this pattern comes from this concurrent processing using multiple queues.

Another interesting thing to note is that it is almost impossible to do parallel processing in Python using multi-threading because of a process known as the Global Interpreter Lock.

The results of all the tests are:

I also noticed that as the size of the workload increased, the gap in TPTs between using a single vs. two vs. three queues increased. This reinforces that coordinated batch processing (CBP) gets more important as your workloads increase, and it’s always a good idea to keep thinking about how you can leverage CBP patterns to make your processing cheaper, saving yourself and your company costs in the long run.