How good is your memory? 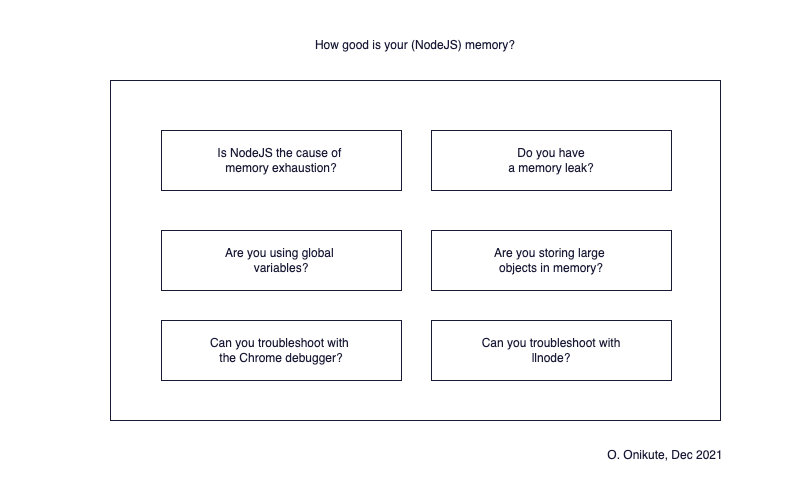 In this post we’ll explore various memory health concerns in NodeJS and ways to solve them. This is a semi follow-up to NodeJS in Flames - which discussed CPU profiling of NodeJS applications using flame-graphs.

It’s important to think about memory performance because in simple terms - bad performance can cause hard-to-squash bugs, downtimes, loss-in-revenue and other bad things that the grinch would love at Christmas. Imagine shipping a great product and then having multiple incidents caused by memory exhaustion in your application. In Node it’ll look like this;

How do you begin to think about solving this? To answer this question in this article, we will:

Memory management is the process of controlling and coordinating the way a software application accesses computer memory. There are two things to think about here - how memory is allocated and how it is freed.

For allocation, software typically uses two regions of memory - stack and heap memory. The stack stores static data (e.g. string values and object addresses), while the heap stores dynamic data (e.g. objects) and is the largest portion as a result. 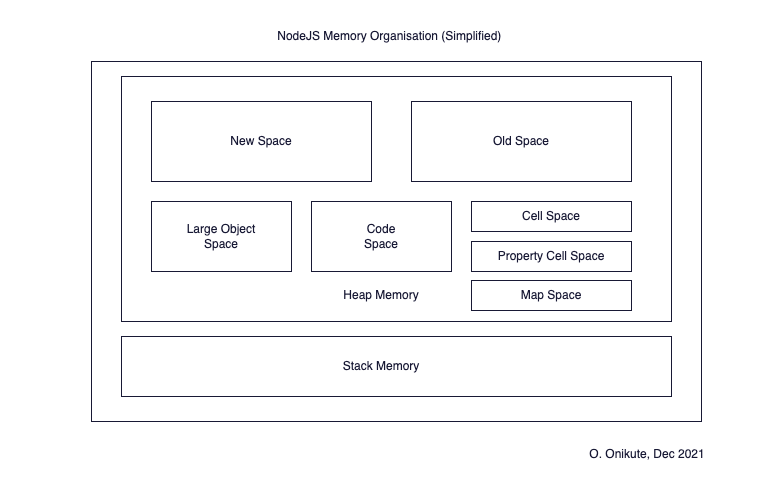 Node runs on the V8 engine so the way it handles memory is based on the V8 memory structure. Any program is represented by allocated memory in the V8 process called a Resident Set.

The heap memory has the largest area because it stores dynamic data. It is also where Garbage Collection takes place, which we’ll talk about in the next section.

Heap memory is divided into various segments (spaces). Each space consists of a set of pages, which are blocks of virtual memory which are mapped to physical memory in an OS. In V8, each page is 1MB in size. We will describe five (5) spaces below:

How NodeJS frees up memory 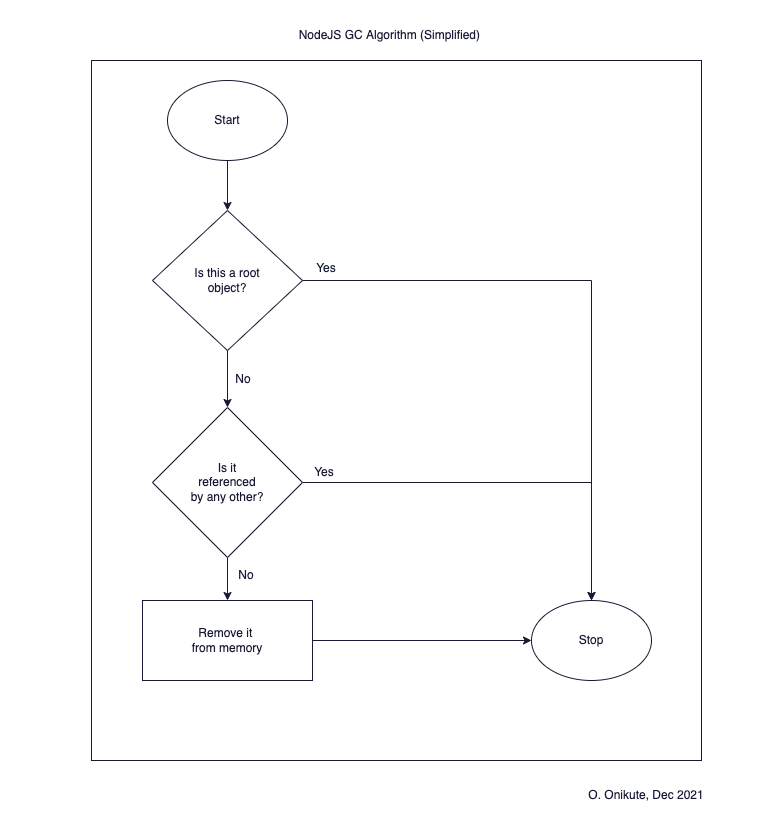 The summary of how Node frees up memory should hopefully sound familiar at this point - GC cycles! Garbage Collection routinely cleans up unused memory by clearing out objects that aren’t needed anymore. The New Space is managed by the Scavenger (Minor GC) and the Old Space is managed by the Mark-Sweep & Mark-Compact (Major GC).

What we haven’t discussed yet is how the GC algorithms determine whether an object is used/unused. From this great tour of V8 garbage collection, an object is unused if:

This means that the only way your program will free up memory is if it has a healthy cycle of unused objects. This is why using globals is discouraged, because they will never be removed by GC. They will take up memory space in your program forever and even worse if they continue to grow unbounded - your program will run out of heap memory and crash.

99 Problems but is Memory Management one of them?

Now that we understand the basics of how Node allocates and frees memory, let’s run through a checklist of possible issues we can have with memory.

Is NodeJS the cause of memory exhaustion?

This is an article about memory usage in NodeJS applications, so it’s easy to assume that Node will always be the cause of the problem, but it won’t. The correct first step is to get information about what’s eating up memory.

A couple of ways you can do this are:

Do you have a memory leak in Node? Is your app crashing?

A memory leak happens when your program allocates a memory continuously without freeing it. It becomes a problem if the process running your program then runs out of available memory and crashes, leading to a downtime 2.

Because the fine details of how memory is managed is abstracted away from you by Node, they can be tough to debug. However if you understand how the memory management works, you’re better equipped to understand how to solve them.

Let’s take a look at this example of a server endpoint with a leak;

The reason for the memory leak here is that the size of the list array will grow with every request, and it won’t be garbage-collected because it’s a global variable. In the wild, it won’t always be this simple to figure out. e.g. your code may be fine, but a package you imported contains a nasty leak. Let’s talk about how to debug memory leaks below;

In most articles you will find on the internet, this will be the recommended method 3. It applies if you can reproduce the leak locally or can tunnel your production instance to your localhost (e.g. ssh -L 8080:localhost:8080 admin@example.com).

I’ll summarise this method described in the Heroku article below:

I like this method because it uses a familiar environment. But depending on your setup, you might not be able to port forward your production instance to localhost for security or other concerns, and might not be able to reproduce the leak locally. The next method - using llnode - is useful if you have access to the instance and can run shell commands on it.

llnode is described as an lldb plugin for Node.js and V8, which enables inspection of JavaScript states for insights into Node.js processes and their core dumps. It is super useful for running postmortems when Node processes crash, but can also be used to analyse running programs.

It’s my current favourite method for memory analysis because of the port-forwarding issue with the Chrome debugger. The use-cases are:

The steps for using llnode are as follows:

With llnode in your arsenal, you can figure out these sorts of issues on the affected server, or copy the core dump to your local machine and run the steps as well. As long as you have the corresponding node executable for your program, you can run the diagnostics anywhere.

An important disclaimer is that core dump files contain everything that was in memory at the time it was generated, which could include sensitive data like keys and user passwords. You should treat them with care and take measures to secure them properly. They can also be very large depending on the application memory usage, so be aware of any disk space constraints you may have and remember to turn them off when you’re done troubleshooting, especially if your servers aren’t ephemeral.

Is your application freeing up memory properly? 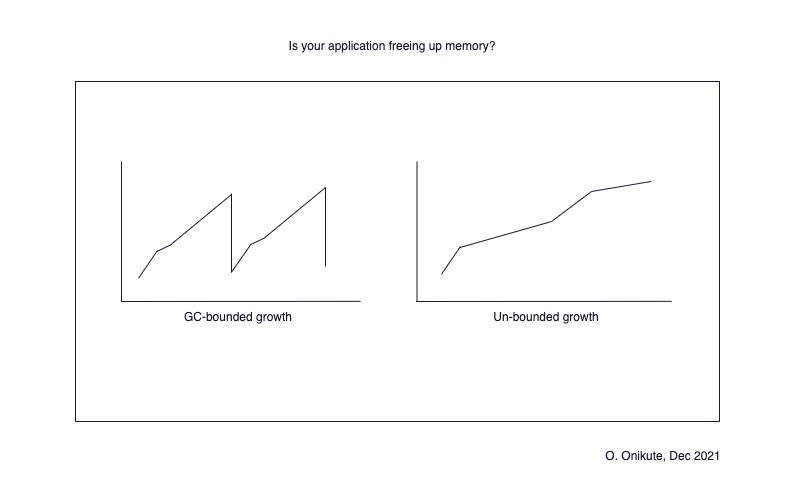 This isn’t really different from having a memory leak, except that it might be slower to surface and the crash would happen over a longer period of time. I just want to use this section to emphasize that your app doesn’t need to crash before you consider whether you’re using memory properly. Some sub-questions here are:

Consider this scenario - you need to move your app from one infrastructure to another. e.g. from Docker running on Kubernetes to a single process running on an AWS EC2 instance (please don’t do that). When running on Kubernetes, if your app’s memory grows steadily until it hits the limit, the pod will get replaced. But on a standalone server running one or two processes, you might not have that luxury out of the box.

For example, you would have to manage the process with supervisord to make sure it restarts when it crashes. You might not think of that right away, so you’re guaranteed at least one downtime (and continuous downtimes depending on how long it takes to restart the process on a crash).

To confirm if you’re freeing up memory, you can do the following:

Are you storing large objects in memory?

If you have large objects in memory, you run several risks including memory crashes, slower processing etc. It’s even worse if those objects aren’t being garbage-collected - you’ll get a memory crash faster than you can say Jack Sparrow.

I can think of two examples of when objects can get heavy and should be noted;

Are you using global variables?

For example if you are using a global variable to do some in-memory caching, you need to remember to reset the value where it’s applicable to your application. If you don’t do this, you’re bound to run out of memory eventually.

In our example, the list array is a global variable. This is the reason the list continues to grow with every request until the crash happens. Since our aim was to collect a record of each request for some reason, we can modify the implementation to write to a storage layer instead. For simplicity, we can stream to a file:

And now the server can handle even double the amount of requests without running out of memory:

When thinking about memory performance in your app, consider the following questions:

In this post, we’ve discussed memory usage in Node and a bunch of different stumbling blocks. There are a lot of articles about figuring out memory leaks using the Chrome debugger, so I didn’t spend too much time talking about that.

Troubleshooting with llnode is less popular however, and might be the perfect solution for some production scenarios. Hopefully you find that interesting and explore more. The code samples can be found in this repository. Let me know if you have any comments or concerns!

Thanks to Chidi, Ari and Ife for looking through drafts of this ❤️